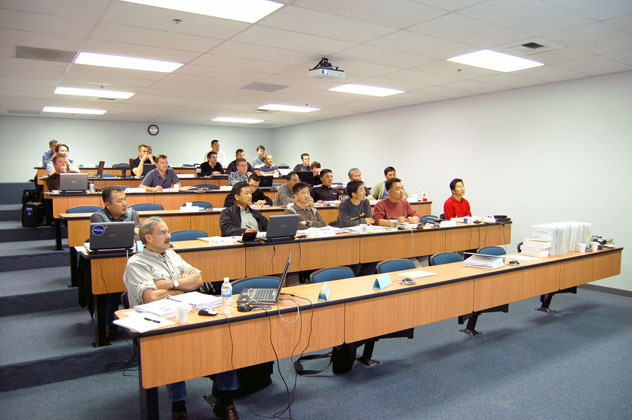 Instructional equipment in the school includes a PCM telemetry ground station with on line data analysis, strip charts, ethernet connected computer stations. Preprogrammed computer data analysis systems are located in three separate locations. In house simulation facilities include a variable stability ground based X-Plane simulator, a general aviation Microsoft IFR simulator, two FLY-IT helicopter and fixed wing FAA approved simulators, a Falcon 4 RADAR simulator and a Camber Corporation RADAR display simulator. An NVG and HMD laboratory facility are also available.
Many of the texts used during NTPS courses are produced and published by NTPS ensuring that the correct depth of information is immediately available. Other information is presented in standard texts available from commercial sources. In addition, tutorial material is available for use as a self-paced study for students.

The school's location lies within convenient range of a number of other flight test activities including Edwards AFB with both the USAF and NASA Dryden Flight Test Centers and the USAF Test Pilot School (20 miles); The Naval Weapons Center, China Lake California (50 miles); Pacific Missile test Center, Pt Mugu California (80 miles); and Palmdale California with its aerospace industrial complex (30 miles). Desert weather is good throughout the year resulting in only a small number of weather related flight delays. Housing is plentiful in the Lancaster/Palmdale area as well as in nearby Tehachapi.

The flight test support facilities available to the National Test Pilot School are diverse and unique which enables NTPS to offer world class professional flight test training for both the civilian and military customers. A short list of these facilities are:

Many of the aircraft which will be used to support FAA training are equipped with NTPS Standard Instrumentation Systems (SIS). The SIS is composed of transducers, signal conditioning, displays and a Pi Research data logger. The SIS can record and display up to 36 digital and analog signals. Data is logged onto a solid state data logger from 1 Hz to 500 Hz as specified by the test engineer. Data is displayed via flat panel displays in analog and/or digital formats.

After a data collection flight, the data logger is down loaded onto the NTPS server and is available for student analysis within 30 minutes of engine shut-down. Students are easily able to manipulate the data via Pi Toolbox. Data can be output as time histories, tables or histograms.

Impala S/N 155TP is instrumented for loads, flutter and spin testing. The aircraft is equipped with an Ayden Vector PCU816-12 telemetry system which transmits critical parameters to the NTPS control room in real time. The control room has 6 student stations each capable or displaying student defined engineering data.

Flight Test Engineering Graduate Assistant Program at the National Test Pilot School Are you a recent engineering graduate considering launching your career towards the sky? Would you like to apply your problem solving skills at the forefront of the flight test... Read more